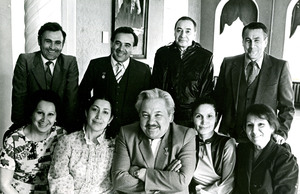 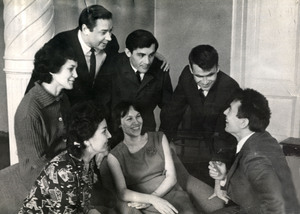 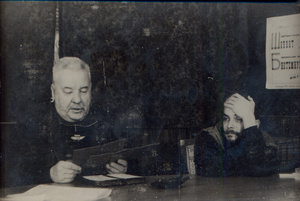 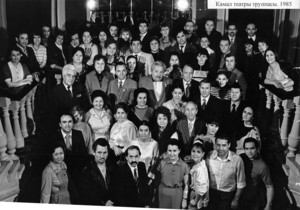 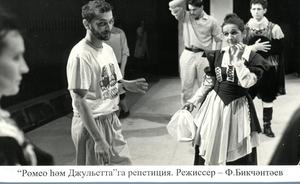 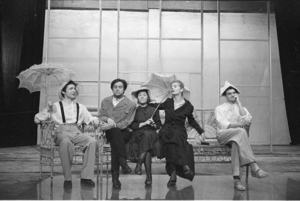 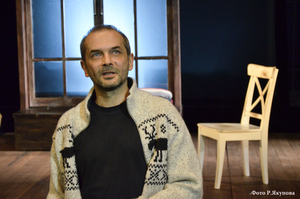 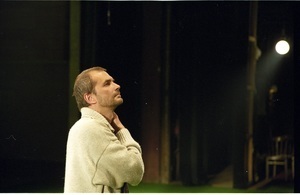 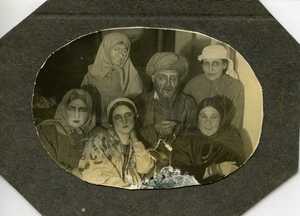 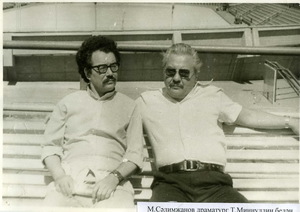 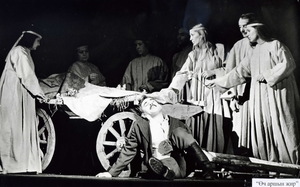 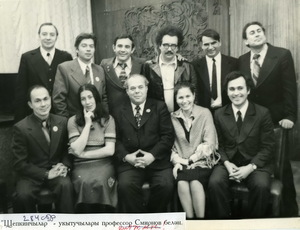 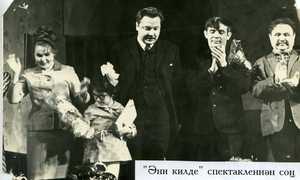 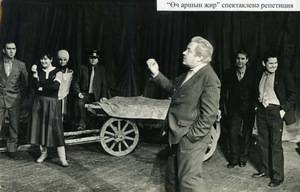 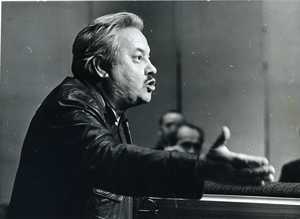 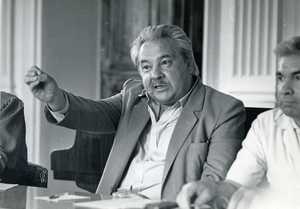 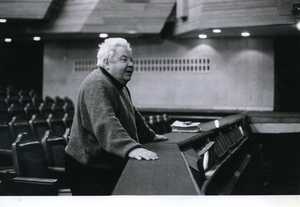 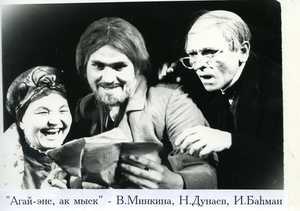 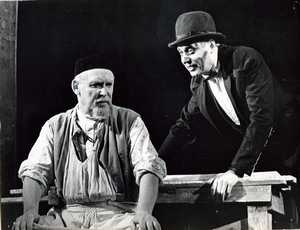 On December 22, 1906 - in Kazan the first public performance in Tatar language was presented by amateur actors from among the democratically-minded youth. “Poor child” and “Love disaster” were shown that day.  Despite the fact that the first Tatar plays were written and performed by amateurs and students in madrassa and in «home theatres» in the late XIX century, this day went down in history as the date of birth of the Tatar theatre.

Teacher from Orenburg, an outstanding personality Ilyas Kudashev Ashkazarsky (1884 - 1942) has organized the first professional theatre company.  Later Gabdulla Kariev (1886 - 1942), actor and director, joined the company, he has been called the "father of the Tatar theatre» by the contemporaries during his lifetime. The first actress of Tatar and Muslim world Sahibdzhamal Gizzatullina-Volzhskaya (1885 - 1974) joined the troupe in 1907.

«Sayar» («Itinerants », the name was given by national poet Gabdulla Tukay in 1908) troupe became a sparkle of enlightenment, culture, democratic appetence for the nation.

In 1923 Tatar Theatre College was open. The masters of Tatar scene became it’s teachers. In 1926 the theatre was appended by graduates of college (Galia Bulatova, Galia Nigmatullina, Galia Kaybitskaya, Khakim Salimdzhanov and others).

In 1926 republic community celebrated theatre’s 20th anniversary. Many of artists has got Honored Artist’s names, theatre was announced Academic.

In 1930 theatre participated in First Olimpics of USSR nations’ theatres in Moscow. Second part of 1920s – first half of 1930s were the years of theatrical director searches.

In the end of 1930s, in the years of Stalin repressions, theatre suffered losses. Within the walls of NKVD died Fatikh Sayfi-Kazanli, Fatkhi Burnash, Akhmet-Tazhetdin Rakhmankulov, Karim Tinchurin, outstanding actor and director Mirsay Amir. Director Gumer Ismagilov escaped arrest and left Kazan forever. Many dramatists left playwriting activity. At the turn of 1930-1940s majority of the performances on the scene were based on translated plays of world and Russian classics.

In 1939 in honor of 60th year of birth of the classic and father of tatar dramaturgy Galiaskar Kamal, theatre was given his name.

With the start of war theatre goes to city hospitals, perform at the battlefield. Many of actors went to war. In war years Vs.Mejerkhold’s student, outstanding V.Bebutov came to Kazan. He staged performances on Russian and world classics (“Storm”, “A dog in the manger”, “King Lear”). Among wartime plays of tatar playwriters outstanding “Hoja Nasretdin”, “Mariam” by N.Isanbet and “Minnikamal” by M.Amir and others.

In 1956, after 20th Communist Party congress, the names of Karim Tinchurin and Fatkhi Burnash were rehabilitated. The older generation actors brought to live “Blue shawl” in K.Tinchurin’s stage version. Since then the legendary performance has been running on the stage. New names has come in playwriting: Khay Vakhit, Sharif Khusainov, Ayaz Gilyazov, Ildar Yuzeev and others.

In 1957 the Decade of Tatar Literature and Art take place in Moscow. The theatre was awarded by the "Order of Lenin" - the highest state award of the Soviet Union. The theatre actor Khalil Abzhalilov was first to be honored People’s Artist of USSR.

In 1958 K.Tinchurin’s  “With no sails”, staged by Sh.Sarymsakov, became first piece of art to be awarded by National Prize named by Gabdulla Tukay.

In 1961 Tatar studio of M.Shepkin college’s graduates return to theatre. They are leaders of theatre in our days. Their group mates - playwriters Tufan Minnullin (1935 - 2012) and Rabit Batulla (b.1937) - started to write for stage.

In 1966 Marsel Salimdzhanov (1934 - 2002) became main director of theatre. His time is a time of mature era of Tatarstan’s theatre art. His first performances showed that he’s a leader, a creator, who established dictatorship of stage direction. The performances he staged – “Mirkay and Ajsylu”, “Escapees” by N.Isanbet, “Amerikan”, “Extinct stars”, “Kazan shawl” by K.Tinchurin, “Milyausha’s birthday”, “Old man from Aldermesh” by T.Minnullin, “Mama’s return” by Sh.Khusainov, “Invasion” by L.Leonov, “Girl without dowry” by A.Ostrovski, “Three arshins of land” by A.Gilyazov and others – are the part of golden collection of multinational theatrical culture of Russia. In 1970-1980 graduates of Kazan Theatre art college, Leningrad State institute of theatre, music and cinematography, M.S.Shepkin theatre college joined theatre.

In 1975 Fuat Khalitov, in 1977 Shaukat Biktimerov, in 1980 – Gabdulla Khamukov, in 1984 Marsel Salimdzhanov were awarded People’s Artists of USSR. In 1979 dramatist Tufan Minnullin, actor Shaukat Biktimerov and director Marsel Salimdzhanov were awarded K.S.Stanislavski  State Prize of RSFSR for “Old man from Aldermesh”. In 1985 Rinat Tazetdinov was awarded People’s Artists of USSR, in 1991 Alsou Gaynullina was awarded State Prize of Russia. Such performances like “It’s Ok – we’ll settle up one day”, “Girl without dowry”, “Minnikamal”, “Three arshins of land”, “Like stars at the sky”, “here we were born, here we gain strength” and  others became laureates of many Festivals and Contests. Till his last day M.Salimdzhanov, great reformer of Tatar Stage, kept staging talented performances, great images of people’s life. His last work – “Basketball player” is a good example of it.

At the turn of 1980-90s director generations changed in theatre. In 1987 director Damir Siraziev staged epochal performance “Scaffold”. The thoughts and feelings of people of perestroyrka era was shown there very well. In 1991 Farid Bikchantaev graduated from GITIS and came back to theatre. He staged “Romeo and Juliette”, “Bogie”, “Dance tutor”, “Red mocker and black haired beauty”, “Gull”, “Three sisters”, “Black felt cloak” and many other plays.

In 1995 first group of actors graduated from Kazan State academy of culture and art under auspices of M.Salimdzhanov and F.Bikchantaev.

High level of artistic and staging performances helped theatre to reach success in many festivals. In 1996 theatre performed abroad for the first time – in International festival of youth theatres in Augsburg (Germany). In 2001 M.Kh.Salimdzhanov was awarded Golden Mask Prize in “For Honour and Dignity” nomination. In 2002, when Marsel Salimdzhanov passed away, his student, honored worker of art of Tatarstan and Russia, G.Tukay National Prize of Tatarstan awarder, professor Farid Bikchantaev became main director of the theatre. Since 2011 he’s heading Union of Theatre workers of Tatarstan.

In 2014 Jon Fosse’s “One summer day”, staged by F.Bikchantaev was nominated for “Golden Mask”.

0
Please subscribe to our emails for more information about the theatre
You have successfully subscribed!
Entrance
Или войдите/зарегистрируйтесь через соц. сети