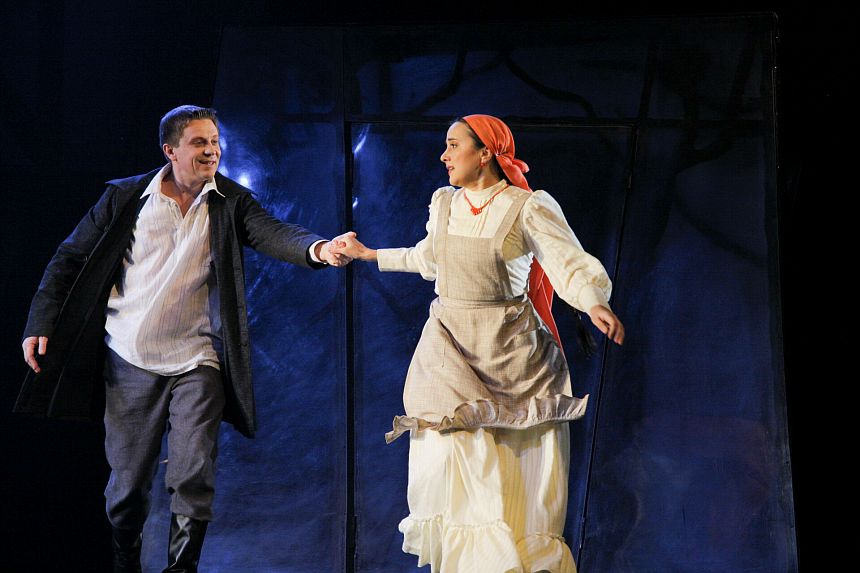 
"Mirkay and Aysylu" by N.Isanbet - a special work for Kamal theatre. In addition to the story of the unfortunate lovers, whose quivering feelings "fathers of the village" declared the cause of the coming drought and severely punished, this play has another story - theatrical. The first production of Gumer Ismagilov in collaboration with the artist Speransky in 1936 was a milestone in the life of the theatre. But the repressions that soon began forced a promising young director to leave Kazan. The next appeal to the play took place thirty years later. The performance was staged by the young Marcel Salimzhanov, recently appointed as the chief director. Essentially, the principles of the embodiment of the national classics were defined with Mirkay and Aysyu, the artistic style began to form and the triumphal career of the reformer of the Tatar scene began.
Half a century later, our contemporary, the young director Ilgiz Zainiyev, took up this play, reading it with the means of the poetic theatre, where there is no room for everyday and historical specifics, but an illusory, ghostly world full of secrets, images, and metaphors appears before our eyes. The performance of Zayniev is a tragedy of youth, doomed in the world of malice and spiritual emptiness. The production is occupied by a large part of the troupe, and the main roles are entrusted to the idols of Tatar youth Emil Talipov and Lyaysan Fayzullina