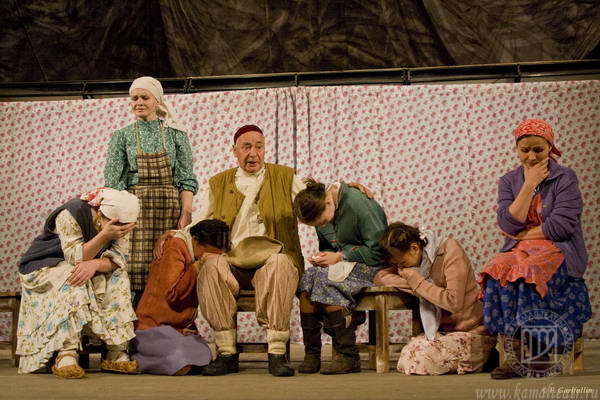 Summer of 1993.  I’m a "young" writer novelist, whose compositions started being read a little bit. The idea to write a play and to become a playwright   even had never come to my mind.   Travelling on boat along the Volga we arrived at Astrakhan. I was sitting all alone on the deck of the ship absorbed in watching the Volga shore - places of mind-blowing beauty!
A tall thin man came up to me and asked permission to sit down.
-Have a seat.
- You are  Zaki  Zainullin?
- Yes - I look at him and see he is not of my acquaintances.
- Let"s get acquainted. I "m Prazat Isanbet.
Serious, experienced eyes carefully focused on me - I considered, "he studies me." My interlocutor began slowly and thoughtfully:
- I asked who are you, and saw you were alone all the time. I wanted to make acquaintance with you long ago, but it didn"t happen somehow. There is a reason for it. Look here, my brother Zaki. I am a director. I have read your novel "Through the hills." I liked it very much. I have an offer. Write a drama using the events of the novel.
- What do you mean, Prazat aby. What a playwright I may be. Do not talk nonsense.
- It"s not nonsense. You have proven by the story - you are a ready playwright. Write a play, and I"ll stage it. Consent, Zaki!  I"ll help you to write it....
We made a decision with Prazat aby. With his help and support the play "Women harnessed to a cart" appeared.
Prazat Isanbet had no time to stage my play. But it happened nevertheless - another director had chosen it for staging...
The outbreak of war... The most serious troubles, sorrows had fallen on the shoulders of young, beautiful, hardworking women. They had time to live with their husbands and had experienced the joy of motherhood, and are happy in their own way. Their husbands went to the front, many of them would never return. Women, stayed at home holding close to their chests barefoot children, in a terrible battle with poverty and hunger, they grow them for the joy of their fathers some of them would be lucky enough to survive in the crucible of war and come back home; and in memory for those who had never returned. I witnessed those women. I grew up with those barefoot boys and girls. I had seen real hunger and starvation together with them.    Who will glorify their quiet heroism if not me...?