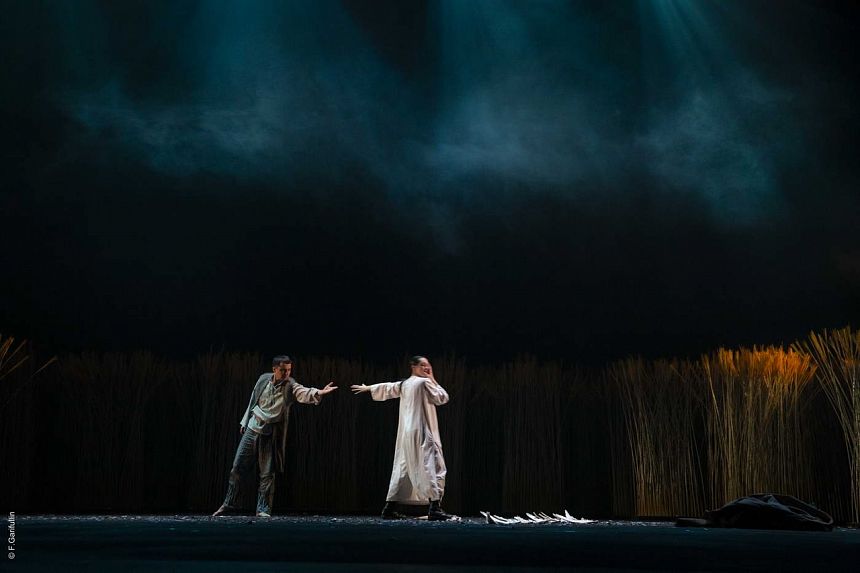 
Directed by Salimzhanov, the play "Faded stars" gained fame back in the 1970s. But times have changed. Today, the anti-militaristic pathos of the play, reinforced by the theme of homegrown mysticism and quackery, sounds especially relevant. The work is rich in ethnographic details and poetic beauty, which will allow the artist to realize their most daring visual ideas, and the troupe will give the opportunity to rethink the classical canons. The structure of the play is surprising in that there are no pronounced antagonist characters in it. Sarvar and Ismail are opposed not by Nadir Makhdoom and not even by the old witch-doctor, but by non-personal categories;- ignorance, disastrous militarism, the forces of doom, which brings "Extinct stars" closer to the ancient tragedy. At the same time, the plot is given to the melodrama genre, which will ensure the audience's interest in the performance. But it is obvious that behind the first plot plan, the director will build a different relationship between the characters and reveal new meanings of the famous work.

"We are also on the threshold of war for many years": how Farid Bikchantayev "Faded stars" to indie folk music.

"Faded stars" on the stage of the Kamal theatre for the second time, almost 50 years after the famous production by Marcel Salimzhanov. "I grew up on this performance. I knew it by heart. It was truly a legendary performance! There are some played by actors!» - bBkchantayev's words are given in the program. He admits that today this text sounds especially topical, sharp, and "painful" and Tinchurin's drama, like 50 and 100 years ago, continues to play an exceptional role in the formation and development of the Tatar theatre.

The Play "Faded stars "today sounds especially topical, sharp, and painful"
Today, the anti-militaristic pathos of the play, reinforced by the theme of homegrown mysticism and medicine, sounds especially relevant. The structure of the play is surprising in that it does not have pronounced antagonist characters. Sarvar and Ismail are opposed not by Nadir Makhdoom or even the old woman-healer, but by non-personal categories-ignorance, disastrous militarism, the forces of doom, which brings the "Extinct stars" closer to the ancient tragedy.

The Kamal theatre lit "Faded stars"
Minimal decorations and musical accompaniment, open space. And the audience, of course, can judge how convincing the acting was. But the fact that a lot of students are involved in the play speaks to the director's courage. Although young people are happy to "rush into battle", but acting experience in such serious productions is necessary in order for the viewer to have a sense of full emotional involvement in what is happening. Especially since we are talking about a tragedy because the plot in the hands of the main character dies her beloved.


I personally think this interpretation of the play shocked me to the depths of my soul, turned my consciousness upside down. Staged very well, innovative, and fresh!