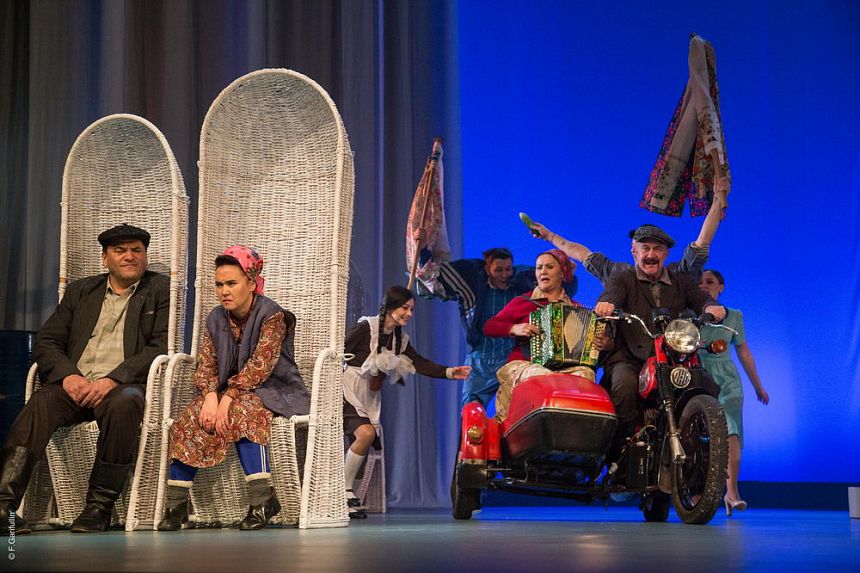 12+
Running time is 2 hours and 20 minutes. The premiere took place on December 1, 2017
Farid Bikchantaev has  been sizing up with the novel "The rooster has flown on the fence" by Ayaz Gilyazov, the coming up of ninetieth birthday of the playwright became an occasion to turn to one of the most beloved writers and a push to implement the long-standing plan. The stage version of the play "The Rooster has flown on  the fence" was born during the rehearsals, the director used the etude method for the first time.. After several attempts to stage the plot of the novel, it became clear that the juicy, caustic, wise language of descriptions and authorial comments of Ayaz Gilyazov is lost, that the dialogues do not disclose all meanings and subtexts. Therefore, actors read (and play) the text "on behalf of the author", creating a moving distance between the person and the character.
In the opinion of the director of the literary and dramatic part of Kamal Theatre, the theater critic Niyaz Iglamov, the play "The Rooster has flown on the Fence" about  Tatar Ivan Ivanovich and Ivan Nikiforovich, about the quarrel between the two families because of a trifle, because of the desire to dominate the district, because of the slavish admiration for the attributes of everyday comfort, because of the psychology of philistinism. "But a deeper semantic layer, which makes this thing particularly relevant today, is located at the level of a simple, but not yet realized, not accepted by Tatar societythat  the idea that the power of the people is unity! And you do not need to wait for trouble to unite, it's so simple - to extend a friendly hand through the wattle fence, "Niyaz Iglamov remarks.
"Bikchantayev again raised too high, he refused the previously found methods." Speaking of everyday things, he ascended over his everyday life, again surprised, amazed, awakened something forgotten, gave lightness and illusion that everything would always be fine. " Tatyana Mamaeva remarks from "Realnoe vremya"